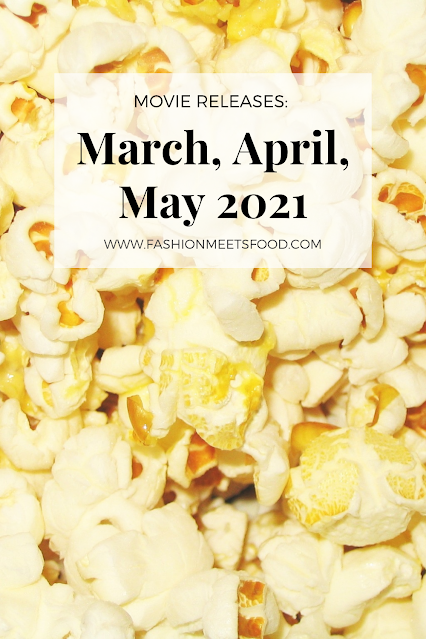 From the big screen to your bedroom TV, I am sharing March, April, May 2021 movie releases (including the trailers) – at least what we know at this current moment. What are you most excited to see?

CHAOS WALKING
Lionsgate Films
In the not too distant future, Todd Hewitt (Tom Holland) discovers Viola (Daisy Ridley), a mysterious girl who crash lands on his planet, where all the women have disappeared and the men are afflicted by “the Noise” – a force that puts all their thoughts on display. In this dangerous landscape, Viola’s life is threatened – and as Todd vows to protect her, he will have to discover his own inner power and unlock the planet’s dark secrets. From the director of The Bourne Identity and Edge of Tomorrow and based on the best-selling novel The Knife of Never Letting Go, Daisy Ridley and Tom Holland star with Mads Mikkelsen, Demián Bichir, Cynthia Erivo, Nick Jonas, Kurt Sutter, and David Oyelowo. Rated PG-13

RAYA AND THE LAST DRAGON
Disney
Long ago, in the fantasy world of Kumandra, humans and dragons lived together in harmony. But when an evil force threatened the land, the dragons sacrificed themselves to save humanity. Now, 500 years later, that same evil has returned and it’s up to a lone warrior, Raya, to track down the legendary last dragon to restore the fractured land and its divided people. However, along her journey, she’ll learn that it’ll take more than a dragon to save the world—it’s going to take trust and teamwork as well.  From directors Don Hall and Carlos López Estrada, co-directors Paul Briggs and John Ripa, and featuring the voices of Kelly Marie Tran as Raya and Awkwafina as the last dragon Sisu. Rated PG

TRUFFLE HUNTERS
Sony Pictures Classics
(Opens NY/LA. Detroit TBD)
Deep in the forests of Piedmont, Italy, a handful of men, seventy or eighty years young, hunt for the rare and expensive white Alba truffle—which to date has resisted all of modern science\’s efforts at cultivation. They\’re guided by a secret culture and training passed down through generations, as well as by the noses of their cherished and expertly-trained dogs. They live a simpler, slower way of life, in harmony with their loyal animals and their picture-perfect land, seemingly straight out of a fairy tale. They\’re untethered to cell phone screens or the Internet, opting instead to make their food and drink by hand and prioritizing in-person connections and community. The demand for white truffles increases year after year, even as the supply decreases. As a result of climate change, deforestation, and the lack of young people taking up the mantle, the truffle hunters\’ secrets are more coveted than ever. However, as it soon becomes clear, these ageing men may just hold something much more valuable than even this prized delicacy: the secret to a rich and meaningful life. Directed by Michael Dweck and Gregory Kershaw. Rated PG-13

CHERRY
(Available on Apple TV+)
“Cherry” follows the wild journey of a disenfranchised young man from Ohio who meets the love of his life, only to risk losing her through a series of bad decisions and challenging life circumstances. Inspired by the best-selling novel of the same name, “Cherry” features Tom Holland in the title role as an unhinged character who drifts from dropping out of college to serving in Iraq as an Army medic and is only anchored by his one true love, Emily (Ciara Bravo). When Cherry returns home a war hero, he battles the demons of undiagnosed PTSD and spirals into drug addiction, surrounding himself with a menagerie of depraved misfits. Draining his finances, Cherry turns to bank robbing to fund his addiction, shattering his relationship with Emily along the way. Brought to the screen in bold, gritty fashion by visionary directors Anthony and Joe Russo, “Cherry” is a darkly humorous, unflinching coming-of-age story of a man on a universal quest for purpose and human connection.
Rated R

YES DAY
Netflix
Always feeling like they have to say NO to their kids and co-workers, Allison and Carlos decide to give their three kids a YES DAY — where for 24 hours the kids make the rules. Little did they know that they\’d be going on a whirlwind adventure around Los Angeles that would bring the family closer to each other than ever before. Starring Jennifer Garner, Edgar Ramirez, Jenna Ortega, Julian Lerner, Everly Carganilla, Fortune Feimster, Nat Faxon, Arturo Castro, and Molly Sims. Directed by Miguel Arteta. Rated PG

OPERATION VARSITY BLUES: THE COLLEGE ADMISSIONS SCANDAL
Netflix
An examination that goes beyond the celebrity-driven headlines and dives into the methods used by Rick Singer, the man at the center of the shocking 2019 college admissions scandal, to persuade his wealthy clients to cheat an educational system already designed to benefit the privileged. Using an innovative combination of interviews and narrative recreations of the FBI’s wiretapped conversations between Singer and his clients, Operation Varsity Blues offers a rare glimpse into the enigmatic figure behind a scheme that exposed the lengths wealthy families would go to for admission into elite colleges, and angered a nation already grappling with the effects of widespread inequality. From Chris Smith and Jon Karmen, the filmmakers behind Fyre, Starring in Reenactments: Matthew Modine (Rick Singer), Josh Stamberg (Bill McGlashan), Wallace Langham (Gordon Caplan) and David Starzyk (Bruce Isackson). Directed by Chris Smith. This film is not yet rated

THE COURIER
Roadside Attractions
THE COURIER is a true-life spy thriller, the story of an unassuming British businessman Greville Wynne  (Benedict Cumberbatch) recruited into one of the greatest international conflicts in history. At the behest of the UK’s MI-6 and a CIA operative (Rachel Brosnahan), he forms a covert, dangerous partnership with Soviet officer Oleg Penkovsky (Merab Ninidze) in an effort to provide crucial intelligence needed to prevent a nuclear confrontation and defuse the Cuban Missile Crisis. Starring Benedict Cumberbatch, Merab Ninidze, Rachel Brosnahan, Jessie Buckley. Directed by Dominic Cooke. Rated PG-13

A WEEK AWAY
Netflix
Troubled teen Will Hawkins has a run-in with the law that puts him at an important crossroad: go to juvenile detention or attend a Christian summer camp. At first a fish-out-of-water, Will opens his heart, discovers love with a camp regular, and sense of belonging in the last place he expected to find it. Starring Kevin Quinn, Bailee Madison, Jahbril Cook, Kat Conner Sterling, Iain Tucker with David Koechner and Sherri Shepherd. Directed by Roman White. This film is not yet rated.

BAD TRIP
Netflix
From one of the guys that brought you Jackass and Bad Grandpa, this hidden camera comedy follows two best friends as they go on a cross-country road trip full of hilarious, inventive pranks, pulling its real-life audience into the mayhem. Bad Trip stars Eric Andre, Lil Rel Howery, Tiffany Haddish and Michaela Conlin. The film is directed by Kitao Sakurai from the minds of Dan Curry, Kitao Sakurai, and Eric Andre – and produced by Andre, Jeff Tremaine, David Bernad, and Ruben Fleischer. Rated R

NOBODY
Universal
When two thieves break into his suburban home one night, Hutch (Bob Odenkirk) declines to defend himself or his family, hoping to prevent serious violence. His teenage son, Blake (Gage Munroe), is disappointed in him and his wife, Becca (Connie Nielsen), seems to pull only further away. The aftermath of the incident strikes a match to Hutch’s long-simmering rage, triggering dormant instincts and propelling him on a brutal path that will surface dark secrets and lethal skills. In a barrage of fists, gunfire and squealing tires, Hutch must save his family from a dangerous adversary (Aleksey Serebryakov)—and ensure that he will never be underestimated as a nobody again. Directed by Ilya Naishuller. Rated R

FRENCH EXIT
Sony Pictures Classic
(Opens in Detroit)
“My plan was to die before the money ran out,” says 60-year-old penniless Manhattan socialite Frances Price (Michelle Pfeiffer), but things didn’t go as planned. Her husband Franklin has been dead for 12 years and with his vast inheritance gone, she cashes in the last of her possessions and resolves to live out her twilight days anonymously in a borrowed apartment in Paris, accompanied by her directionless son Malcolm (Lucas Hedges) and a cat named Small Frank—who may or may not embody the spirit of Frances’s dead husband. Directed by: Azazel Jacobs. Rated R

The Woman in the Window
Netflix
Anna Fox (Amy Adams) is an agoraphobic child psychologist who finds herself keeping tabs on the picture perfect family across the street through the windows of her New York City brownstone. Her life is turned upside down when she inadvertently witnesses a brutal crime. Based on the gripping, best-selling novel adapted by Tracy Letts, shocking secrets are revealed and nothing and no one are what they seem in this suspenseful psychological thriller starring Amy Adams, Gary Oldman, Anthony Mackie, Fred Hechinger, Wyatt Russell, Brian Tyree Henry, Tracy Letts, Jennifer Jason Leigh, and Julianne Moore.  This film is not yet rated

A QUIET PLACE PART II
Paramount Pictures
Following the deadly events at home, the Abbott family (Emily Blunt, Millicent Simmonds, Noah Jupe) must now face the terrors of the outside world as they continue their fight survival in silence. Forced to venture into the unknown, they quickly realize that the creatures that hunt by sound are not the only threats that lurk beyond the sand path. Starring Emily Blunt, Cillian Murphy, Millicent Simmonds, Noah Jupe, Djimon Hounsou. Directed by John Krasinski. Rated PG-13

← 31 Things to Do in March (Quarantine Edition)
How To Make A St. Patrick’s Day Charcuterie Board →