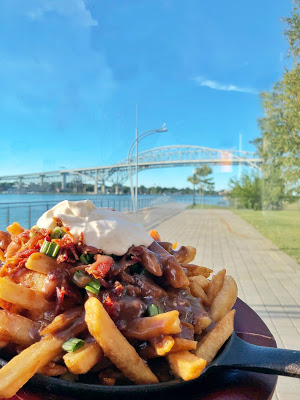 i was gifted the opportunity to try MATCH in exchange for an honest review.
You know the saying “When in Rome,” well “When in Canada” – you give poutine a try for the first time. If you don’t know, poutine is a dish originating from the Canadian province of Quebec and consist of French fries and cheese curds that have been topped with a brown gravy. Personally, I thought this sounded completely disgusting. However, since it is a Canadian thing I don’t really see how we could cross the boarder and not try it.

We decided on the Babushka and it was absolutely delicious – literally we ate too much. The gravy had a unique flavor which I think really helped the taste of the poutine. Have you ever had poutine before? If so where’s your favorite place to get it?