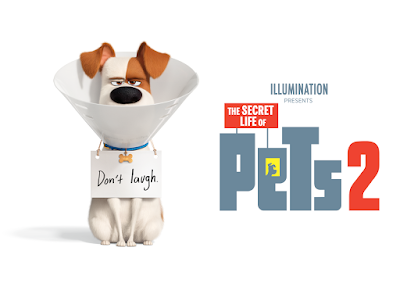 Have you ever wondered what happens in the minds of our pets when we’re gone? That question was answered when we were introduced to the adorable characters of The Secret Life of Pets. Three years after the original movie, Max, Duke, Gidget and the rest of the gang return for The Secret Life of Pets 2. Unlike the first Secret Life of Pets, the sequel does not have one main plot. Instead, it is formatted more like an episode with three different story-lines going on at once – each starring at least one of the original pets.

The first story-line involves Max and Duke’s owner getting married and then adding a new addition to their family, baby Liam. They then take a family trip to the countryside – where an older dog named Rooster teaches Max how to relax and face his fears. Duke just kind of exists, and doesn’t seem to play a large role.

In the second story line Gidget attempts to retrieve Max’s busy bee toy that she loses while he is on his trip.

The final story-line stars Snowball who poses as a superhero to help Daisy a who is a new character free a circus tiger from captivity.

The movie was cute (not as cute as the first one), and there were some moments that were potentially problematic throughout the movie. In Snowball’s story live he is working to help Daisy rescue in adorable white tiger cub from an abusive circus organizer – during these parts animal abuse is show and he even kicks Max. Eventually the circus organizer gets hit by a car a couple times. Both of these scenes were shocking to see in the movie. Something else that was really odd was the fact they said “Pissed off Pickles”, I think its totally unnecessary for that language in a children’s movie. Personally I didn’t even want to hear it. When that was said you heard the gasp over the audience and a few children say “that was a swear”.

Overall it was a cute movie, with some unnecessary moments and scenes.

← Get the Scoop on Hudsonville Dairy Free Ice Cream
Coming to Detroit: CATS →