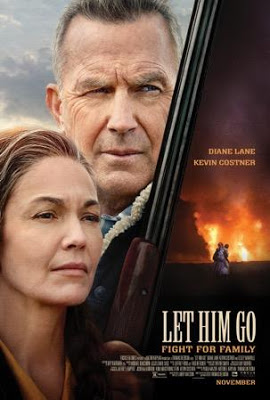 How far would you go to get back someone you loved, who had been ripped from your life and your only choice was to go to drastic lengths to protect them? If you\’re looking for a thriller then Let Him Go (in theaters this Friday11/6/20) the new Focus Features film is just for you.
My Summary of Let Him Go
Let Him Go is set in the late 1950\’s and follows George (Kevin Costner) and his wife Margaret (Diane Lane) an aging rancher couple as they try to find and bring back their grandson after his new step-father moves him away.

The couple lived a simple life on their ranch in Montanta, with their son James (Ryan Bruce), his wife Lorna (Kayli Carter) and the couples infant son Jimmy. Tragedy strikes when James passes away in a freak accident.

Fast forward to a few years down the line and the widowed Lorna marries Donnie (Will Brittain), a polite and charming man, who is not at all what he seems. Margaret takes a trip into town, and spies Lorna, Donnie and the little boy Jimmy from her car. Margaret watches Donnie give Jimmy a slap for dropping his ice cream and then gives Lorna a harder slap. As if the abuse wasn\’t awful enough to experience a few days later, without a goodbye, the family is gone. Donnie has taken them to move in with his family somewhere in North Dakota.

Margaret knows that the fate of their grandson relies in the hands of her and her husband. George points out to Margaret that she has no legal justification to take the boy away from his mother, however her instinct tells her she needs to go find little Jimmy and George goes along to keep Margaret protected.

Overall Thoughts of Let Him Go
This movie is a THRILLER, you are on the edge of your seat and left wondering in today\’s day and age how far would you go to get back something that is so precious to you. The movie does seem to go a little slower, which based on the time period and Western feel it makes sense for it to move a little slower. If you\’re looking for a movie that will keep you interested and wondering what will happen next, I highly recommend checking out Let Him Go this Friday when it is released in a theater near you.

About Let Him Go
Following the loss of their son, retired sheriff George Blackledge (Costner) and his wife Margaret (Lane) leave their Montana ranch to rescue their young grandson from the clutches of a dangerous family living off the grid in the Dakotas, headed by matriarch Blanche Weboy.  When they discover the Weboys have no intention of letting the child go, George and Margaret are left with no choice but to fight for their family.
Writer/Director: Thomas Bezucha, based on the novel Let Him Go by Larry Watson
Producers: Paula Mazur, Mitchell Kaplan
Cast: Kevin Costner, Diane Lane, Lesley Manville, Jeffrey Donovan, Kayli Carter, Booboo Stewart, Will Brittain